A few weeks ago Greg Watkins-Colwell of our division went collecting at the beach of Morris Cove here in New Haven County with Jose Pereira of the National Marine Fisheries Service, along with two NMFS interns, Austin Hurst and Jason Bennett.

They seined up a glass eel! It was actually so glass-like and crystal clear that when Greg showed it to me in the bucket containing his catches, it took me a good few minutes to find it in the water! Here 'tis: 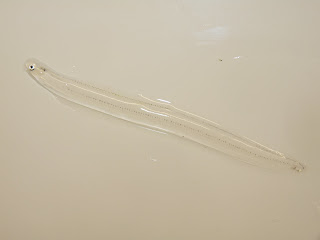 These transparent wonders are not a species, but rather they are the second stage in the life cycle of a number of eel species in the family Anguillidae. This particular specimen is an American eel, Anguilla rostrata. For the rest of the post I'll focus on the life cycle of this species for simplicity's sake.

American eels are catadromous, meaning that they spawn in the ocean, but they inhabit freshwater, estuaries, and brackish habitats for most of their lives. There are five stages in the life cycle of these eels, with the first stage being the leptocephalus larval stage. At this stage the eels are transparent like the glass eels, but they are smaller and more flattened. Here's a pic taken from Wikimedia commons:

The eels remain as leptocephali, floating about in the ocean where they were born, for about a year. They then metamorphose into glass eels, when they gain their adult shape (but not size) and are still transparent. At this point they migrate to estuaries on the Atlantic coast. Here's another pic of our recent glass eel acquisition: 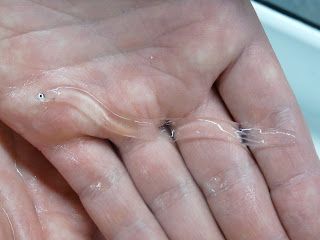 The next stage is the juvenile or "elver" stage. At this point they gain pigment and size and generally begin to resemble adults. Also at this point some individuals will migrate pretty far inland. Here's a pic of this stage, taken again from Wikimedia commons: 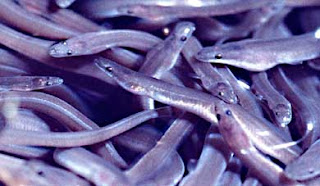 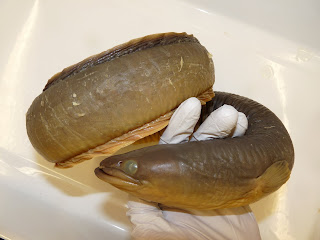 YPM ICH 8080 was collected in 1983 in Hesseky Brook in Litchfield County, CT. Here's a picture of its underside, which reveals quite clearly why they're called yellow eels! 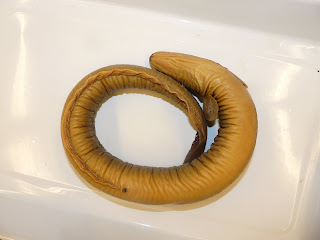 The last stage of the life cycle is that of the silver eel, at which point the eels are sexually mature and migrate to the Sargasso Sea (in the heart of the "Bermuda Triangle") in the Atlantic Ocean to spawn. Here's a graphic that shows the location of the Sargasso Sea: 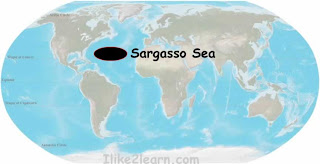 And here's a graphic depicting the final silver eel stage of the American eel, taken from The Inland Fishes of New York:

A final fun fact about glass eels: until 1893, (quite understandably!) glass eels were thought to be a distinct species of eel, Leptocephalus brevirostris, hence the name leptocephalus for the larval stage of these metamorphosing eels. Once a French zoologist raised a few leptocephali in a tank, however, the matter was clarified.
Posted by Jordan Colosi at 9:33 PM 5 comments:

Highlights from Biodiversity 2010 and Beyond: Science and Collections

I returned from the SPNHC conference (see post below) on Sunday. The conference was fantastic and I had a blast! I can't write about it all, but here are a few things in particular that got my blood running hot. (**Note: posts on this blog will normally be devoted to the diversity of life found in the Peabody VZ collections, but since the SPNHC conference was about, well, biodiversity and natural history collections, I feel that steering away from the specimens for a bit here is appropriate**).

1) The International Barcode of Life Project (iBOL). Paul Hebert, the "father of DNA barcoding" and the director of iBOL, gave the keynote address at the conference. The iBOL project's mission is essentially to build a comprehensive inventory of life on Earth via DNA barcoding. What is DNA barcoding? From their website:

It's an ambitious undertaking, but an important one at a time when our planet's biodiversity is severely threatened, yet our reliance on this same biodiversity is only increasing (click here for more on that). And despite 250 years of studying life, our knowledge of it is still quite meager (scientists have described approximately 2 million species, yet it's estimated that there are likely 30 million species or more on Earth).

Like I said, it's an ambitious project, but I left the address feeling optimistic thanks to a point that Hebert made: If we as a society can come together and make such impressive advances as we have in the fields of astronomy and physics (think Hubble telescope, space shuttles, Large Hadron collider, etc.), why can't we also come together and advance in this same way in biodiversity science?

Oh, one more thing about the iBOL: ultimately one goal of the project is to develop a "hand-held device that will provide real-time access to identifications by anyone in any setting". Think little kids carrying around species identifiers instead of (or in addition to) gameboys. Awesome. 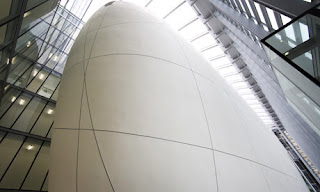 The architecture is stunning (the "Cocoon" shown above is where much of the Museum's insect collections are housed), but even better is that this new space is designed so that the public can see the research collections and interact with (and even quiz!) many of the scientists at work. It's a bold effort to let the public in on the scientific process so that they can better understand what scientists do and how science works-- something I think is great especially now when there is so much mistrust in science (e.g. think climate change, vaccines, evolution, etc. etc.). Click here for an article about the Darwin Centre from The Guardian.

3) GEOLocate and BioGeomancer software. I saw demos of these from Nelson Rios and John Wieczorek, respectively, and they are awesome. They're georeferencing programs that help you easily figure out what the latitude and longitude coordinates are from locality descriptions (ex. a specimen collected in "Putnam County, TN, from the Calfkiller River, 1 mi. south of Highway 84"). I had to georeference a lot of specimen records just last month and I did it using a gazetteer and Google Earth-- a rather slow and clunky method. I wish I had known about these!

4) The Biodiversity Heritage Library (BHL). A big (and very exciting) theme at this year's conference was collection digitization. Becky Morin of the California Academy of Sciences gave a talk about the BHL, which is the digitization component of the Encyclopedia of Life. The BHL has compiled and digitized a wealth of taxonomic literature, including many original species descriptions, which can be very difficult to find and get your hands on when they are very old! The majority of the literature at the BHL in fact is from pre-1923. Very exciting, as access to taxonomic literature is crucial to research in systematic biology.

5) "Web 2.0, social networking, and the future of on-line collections access." This was the title of a talk given by Chris Norris of the Peabody and of the blog Prerogative of Harlots. In it, he encouraged us all to think about how museums can better make our collections and specimens available online not only for professionals, but also for the public so that they too can get a glimpse into our inspiring holdings and better understand the science and importance behind them. I obviously was excited by his talk, as that is exactly what I am trying to accomplish with this blog!

6) The Canadian Museum of Nature. They were one of the conference sponsors and we were lucky enough to have an evening mixer there! I also got a chance to explore it more fully the Saturday after the conference. It was just renovated and had just re-opened on May 22. The exhibits were beautiful, highly interactive, and very educational. The external architecture wasn't too shabby, either. If you are ever in Ottawa, it is a must see! Here are some pics. Here, the museum from the outside: 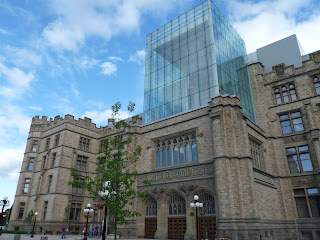 Here's a shot of the glass atrium from the inside: 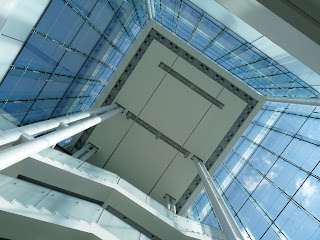 This is the Blue Water Gallery, with a blue whale skeleton as its centerpiece: 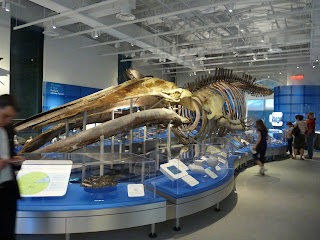 The Bird Gallery was equally exquisite: 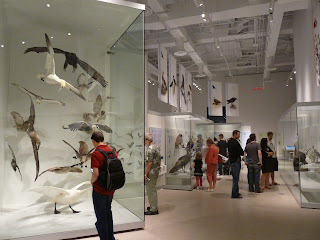 One last picture. This was a little scene I really liked titled "Mammals inherit the earth" in the Talisman Energy Fossil Gallery. If you look closely you can see little mammals crawling through the eye socket of the T-rex. I also thought it was very fitting that the fossil hall was sponsored by an energy company since the science of paleontology has been in a very real sense a big sponsor of our energy resources (many paleontological expeditions have led to the discovery of oil and coal!). 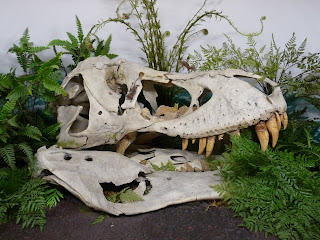 Posted by Jordan Colosi at 4:49 PM No comments: