Happy Halloween! In Halloween spirit, here are some ghouls and goblins: 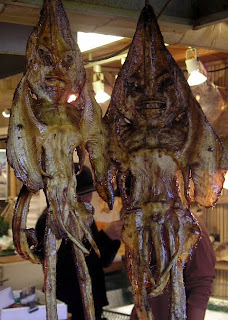 Sailors dating at least to the 16th century would find these horrors at sea and often brought them back to shore as evidence for their stories of sea monsters, sea devils, and the like. What are they exactly? Called "Jenny Hanivers," they're actually just dried-out specimens of skates, rays, and guitarfishes!

Skates, rays, and guitarfishes make up the superorder Batoidea, and what you see in the pictures are the undersides of the animals. The nostrils and mouths of these creatures are positioned perfectly, as you can see, such that they look like a demonic face. (The eyes are actually on the top sides of the animals.)

Here is YPM ICH 5971, a guitarfish of species Aptychotrema vincentiana, collected in 1968 off the coast of Adelaide, Australia. Here's the underside of the animal, where you can see the "Jenny Haniver" face: 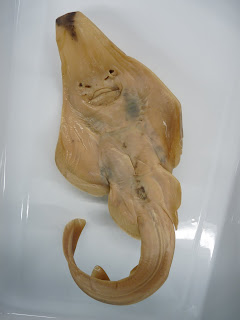 Here is the top side of the animal, where you can see the true eyes: 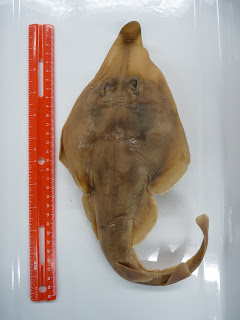 Of course, this specimen isn't properly a Jenny Haniver in the full sense of the term. But it's halfway there! To make a Jenny Haniver, once you've caught a skate, or a ray, or a guitarfish, you should dry it out, not fix it with formalin and preserve it with ethanol as we did with this one. It's when they're dried out that they really take their ghoulish shape.

You should then carve it and shape it to make it look even more grotesque. Sailors in Antwerp, Belgium, were famous for the Jenny Hanivers that they carved on their docks and then sold to superstitious tourists. In fact, it's thought that the term "Jenny Haniver" might come from these sailors. The French phrase jeune d'Anvers means ('young [person] of Antwerp'). The thinking is that British sailors then turned this phrase into the personal name "Jenny Haniver."

Here is YPM ICH 22495, one more almost-Jenny Haniver from our collection. It's a skate of species Bathyraja maccaini that was collected on a 2009 Yale research voyage to Antarctica. Here's its underside: 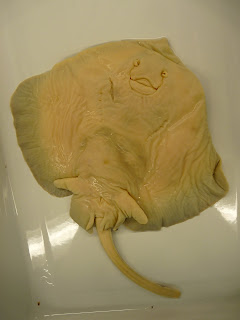 And here's its top side: 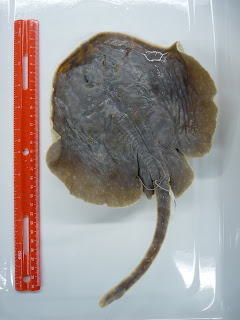 Posted by Jordan Colosi at 11:48 AM No comments: