Okay, so this eel doesn't actually eat shark hearts, but it does parasitize them, feeding on the blood within.

Meet the pug-nosed eel, Simenchelys parasitica. This specimen was collected in 1995 by a vessel called the F/V Patty Jo, near the Hudson Canyon, a submarine canyon off the coast of New York. 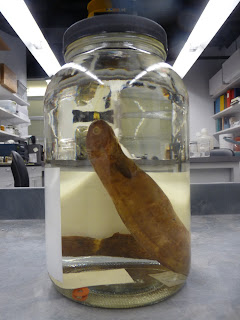 This species normally scavenges at the bottom of the ocean, using its very powerful jaws to tear off chunks of flesh from sunken carcasses. It's more famous, however, for its occasional parasitic forays. It's been known to ensconce itself along the backbones of various fish, such as halibut and cod, and stay there for a good while without actually killing the fish. As for the shark hearts, two pug-nosed eels were found inside the heart of a shortfin mako shark in 1992, and evidence showed them to have been feeding on blood in the heart. These eels aren't any kind of small, either. The eels that were found in the mako shark heart were 8 and 9 inches. Our specimen is a bit bigger, even. Here's a pic where you can see YPM ICH 11443 in relation to my hand: 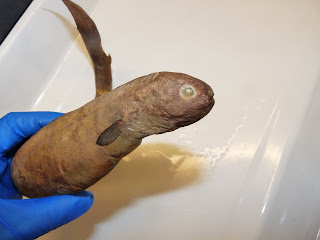 Scientists speculate that the two eels probably burrowed into the shark through the gills or the throat. If it makes you feel better, we don't have any gills! And you can always close your mouth... Just kidding, you shouldn't have to worry about these guys, as they live only in the deepest of deep seas.

A note about YPM numbers. A specimen's YPM number is the number it's assigned in our database, searchable here. The prefix "ICH" stands for ichthyology, and is used to designate fish specimens. You'll also probably see me use "MAM", which stands for mammology (mammals), "ORN", which stands for ornithology (birds), and "HER", which stands for herpetology (reptiles and amphibians).
Posted by Jordan Colosi at 8:39 PM